GETTING TO KNOW THE GROUP 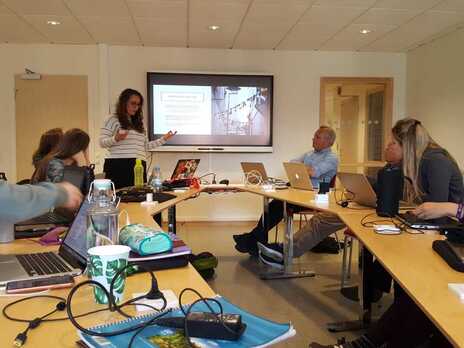 presenting my research question of multilingualism in schools to the group © Leenke Wolf
The first day of our Study Week in Borås was dedicated to getting to know each other, learn about each one's project ideas, about the city of Borås, the university's campus and of course to getting to know our proPIC coordinators and teacher Tobias Ruhtenberg and Richard Baldwin.

To my suprise, the group consisted of not only proPIC participants but also two PHD students from England/Greece as well as the Oman. Getting to know Malik from Oman, who is currently doing his PHD in England, was an experience I value a lot because we both had so many questions for each other on our home countries, cultural habits, educational systems and much more. proPIC is all about Europe but I did not expect to expand all the way to Oman - a much appreciated experience!

CAMPUS TOUR WITH THE GROUP 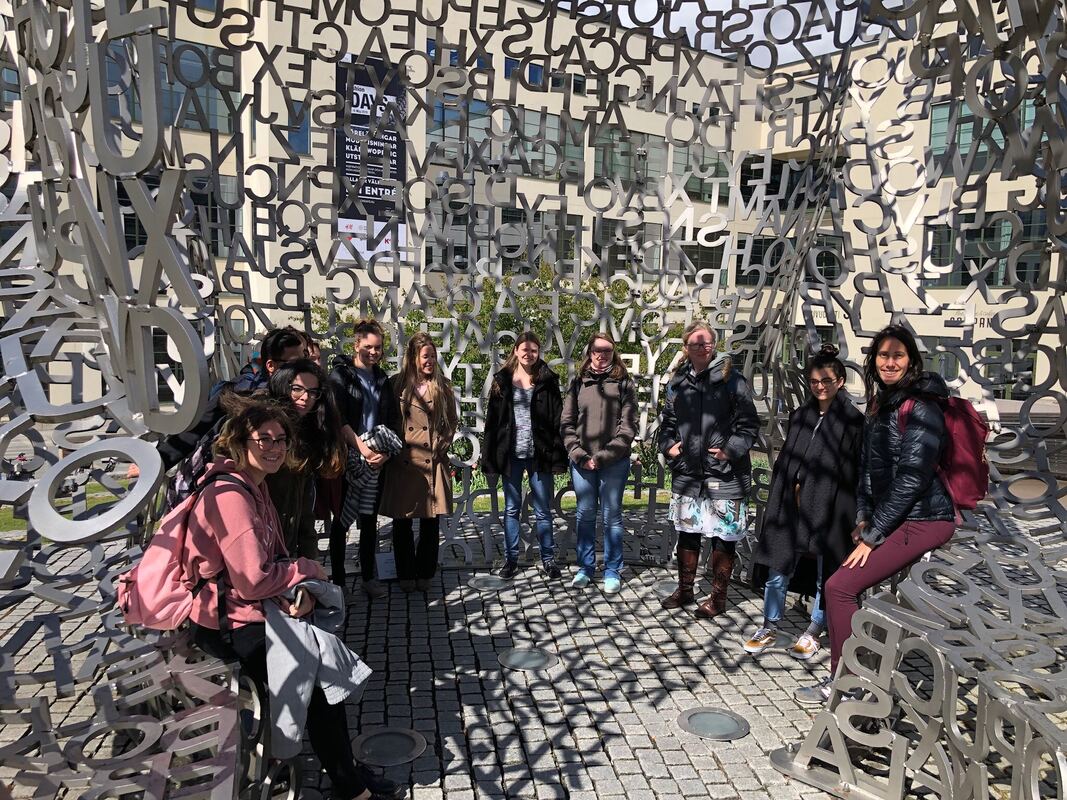 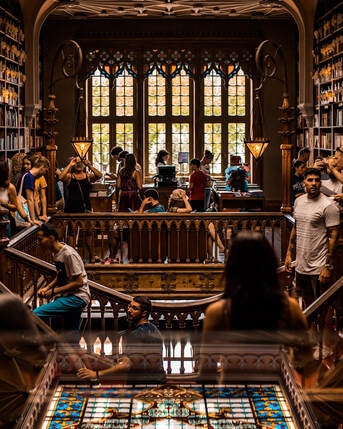 Traveling to another always includes noticing and - in the best case scenario - also learning about the other country's habits, customs and cultural differences that come along with them. Traveling to Sweden, many things were the same as in Germany, although I noticed differences here and there. For example the waiting hall for coach travelers at the train station in Gothenburg. It is integrated into the train station building and is therefore big and bright and warm, with many possibilities for seating, refreshments as well as screens that show the bus schedules. In Kiel, however, coach travelers have to walk another 10 minutes from the train station to get to the coach parking. There is no a building, no seating and no shops, which leaves people exposed to the weather, waiting for their coach buses, not knowing if they arrive on time because there are no screens showing schedules and delays. From this, it can be presumed that coach travelers seem to be appreciated more in Sweden than in Germany.

Coming to the University of Borås, I quickly noticed the differences to the German universities I know. There are designated places for students to work within the university buildings, with access to seating, tables and sockets. There is a room full of Apple computers with full software access for students to work with and rooms prepped with digital tools far beyond the occasional smartboard at Kiel University - notice that the students do not pay extra and that higher education is free in Sweden. 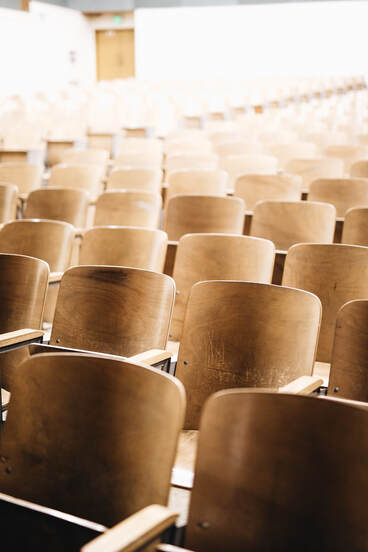 © Nathan Dumlao / Unsplash
Also, the strict rules of German libraries are here transformed to an open working atmosphere, where bags do not have to be checked in at the entrance and people can drink coffee while studying in the library. Talking about drinking coffee: the university sells their beverages in ecological cups - which is of course still waste but at least a step towards a more eco-conscious university. When it comes to lunch, the system also varies from the one in Germany, especially Kiel University, where one can hear students complain about the food selections as well as portion size. At Borås University, one does pay about 6 Euros for a meal, which is approximately double the prize in Germany. On the plus side, however, the meal includes a food selection out of three different dishes which can be mixed at each person's liking. Free food refills, as well as salads, fruit, bread and tap water and coffee or tea are included - in my opinion, this means 6 Euros well spent.

Moreover, when it comes to different customs, a moment on the first day of our study week in Borås was a good example for this phenomenon: after the first student presented her research project to the group, people wanted to give recognition for the presentation which many did by clapping. Our group consisted of people from different nations, nevertheless seven of us were Germans. As it is a custom in German universities, all of the seven started knocking on the table at the end of the presentation instead of clapping their hands. A little moment of shock, then laughter and Tobias asked us what we were doing there - it turned out that knocking on the table as a form of recognition is a German custom that none of the others knew before. We had a spontaneous talk about these customs of recognition at university and knocking on the table became our group's signature move: from then on, everybody knocked instead of clapping, smilingly, as we had just accomplished our first collective intercultural learning experience.
LEARNING ABOUT ICT TOOLS
After getting to know each other as well as Borås a little better, Tobias Ruthenberg and Richard Baldwin soon introduced us to so called Information Communication Technology (ICT) tools: digital tools that work with digital infrastructures to enable - in our case - interactive teaching. As an example Richard showed us how he is working with nearpod, a platform that can be used as an alternative to Microsoft Power Point and enables student engagement. Tobias explained that as a teacher he can see how many people are participating and since students in Sweden usually have their own laptops or other devices with them in university, it is a great tool for him to use.

The students can see the presentation on their screens which Tobias sees as an advantage because this way he can keep his students’ focus as they can take notes on the slides or next to the slides and can download them directly. Tobias explains that informal learning can be used as a tool because teacher is no longer the only educational entity. At the same time, he want to teach source criticism within this autonomy because “its’s not about technology, it’s about the content.” To Tobias, one thing is clear:
“If you don’t have the tools today in society, your voice won’t be heard.”
“With the help of ICT tools I’ve got more time to do better things”
– Richard Baldwin, teacher of English at Borås University
TASK FOR THE WEEK
On the first day, Tobias and Richard also present us with a task for the week: we are to design a foreign language lesson in small groups. The goal is to make it a learning opportunity for the rest of the group and to make them active in some way of our choosing. But there's a catch: not only are we supposed to create and hold the lesson, on top of this we will be filmed, using another ICT tool our Swedisch teachers present to us: Swivl - a video app, working with a robot that follows you around in the classroom. The recorded video can be saved to any compatible device and much like the VEO app we have learnt about during our first study week, the Swivl app enables you to put time stamps and comments during analysis and upload your videos to the cloud. After planning and holding the lesson, we were to create a video paper and reflect on our teaching as a group as well as individuals.

When I heard about the task, my first reaction was nervousness and maybe even a little fear. Working on a group task and then holding a lesson is one thing, but being followed around by a robot camera and then having to rewatch and analyze the material was certainly something I had never done. Spoiler: In the end, there was no reason to be afraid, instead it was a great experience I could really, deeply learn from.
It was a totally new and truly interesting experience. After our lesson, we went to one of the fanciest university rooms I have ever seen in my life: a room filled with screens which allowed us to work on our videos and turn them into a video paper. The reason for this was to have a deeper look at how the lesson went, comparing it to the set out plan. The group work during all of these processes could sometimes be a little nerve-wracking because our three brains that haven't worked with each other like this before, sometimes got in the way of each other. Also, albeit the smart classroom, technology left us struggling as we could not get the Swivl files to work on our computers - again the compatibility problem of Apple and Windows.
SCHOOL VISIT
Apart from the in class activities, we also got the chance to visit Sandgärd school near Borås that incorporates technology as an integral part of teaching, e.g. through computer-based classes in which every student gets to use a computer provided by the school and uses it as their main working medium. In Sweden, so Tobias told us, the vision is that children have equal access to technology and that the tools that you use should be coming from the schools.

It was an interesting visit, but together we reflected that it would have been better to split the group up and/or visit more than one school so that it would be possible to gain a wider picture of advanced schools when it comes to digitalism. Also, knowing more about the Swedish school system in general as well as the school we visited would have been needed to understand the context (e.g. does every class have computers, is this a sample lesson, etc.).