MULTILINGUALISM:
PODCAST WITH A RESEARCHER

PODCAST: TALKING TO A RESEARCHER

JProf. Dr. Inger Petersen
Multilingualism might not yet have entered foreign language classrooms on a large scale but in Germany it is one of the main focuses when it comes to teaching German as a second language. During my participation in the German as a Second Language project at the University of Kiel, JProf. Dr. Inger Petersen was one of our teachers. She has been working and researching in the language acquisition field at several universities in Germany. Since 2016, she is researching the pedagogical aspects of teaching German as a second language at Kiel University. [1]

As an expert in her field, she agreed to have a talk with me about multilingualism and its current role in schools and teacher training. She gave insight to both the status quo as well as research in the field of foreign language acquisition and assessed the chances and restrictions of multilingualism. 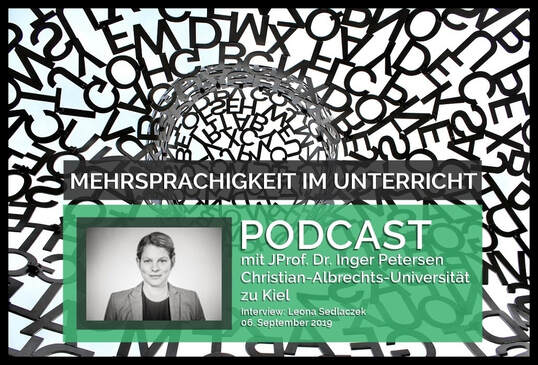 According to JProf. Dr. Petersen, multilingualism has been picked up by European foreign language teaching didactics; comparisons to other languages can already be found in foreign language learning material and books. Such comparisons might, however, only function as practical references in the vocabulary sections of books, e.g. French le train, Spanish el tren, English the train.

JProf. Dr. Petersen calls this out as a preference of some languages in comparison to others.  Languages of Romanic or Germanic origin therefore seem to have some kind of prestige and can thus be found as a multilingual element of foreign language teaching. Other languages that are brought into the classroom by students, such as Turkish, Polish, or Arabic, are often overlooked. In order to opt for intercultural learning and to get rid of segregating prestige, multilingualism – in all of its facets – must be seen as a value.

For many teachers, multilingualism is not an easy task because they were not taught in a multilingual manner when they were in school and they were not instructed on how to teach it when they attended university. Multilingual teaching would probably also bring co-teaching to the table or at least demand collaboration of foreign language teachers within a school which can create difficulties of its own.

Multilingual students can, however, contribute to break the monolingual habitus. In the podcast, JProf. Dr. Petersen pointed out that letting students take over the role of an expert for a while, not only enables personal growth but also shows acknowledgement of the other language(s) a student speaks and makes them feel valued. Stepping out of one’s “sublimeness” as a teacher for a moment can function as a great tool in the language classroom.

The above-mentioned problem of prestige also applies to research on multilingual teaching which, for a long time, favored those who showed a more “elite” multilingualism, e.g. children who are raised bilingually within and because of a certain social status. JProf. Dr. Petersen says that when it comes to advantages of multilingualism; research often points at those bilingual children when instead multilingualism is not about prestige or elite learning but takes place within all kinds of varieties and languages.

Studies have shown that humans are able to learn several languages without being negatively impacted by it; on the contrary, researchers agree that being multilingual is a positive factor in learning processes. JProf. Dr. Petersen mentions studies that were conducted within the 60ies and 70ies often referred to multilingualism in school as too demanding for children and explains that within those studies mixing languages has been misinterpreted as a deficit when in fact it is a natural process of foreign or second language acquisition.

Research could already prove that multilingualism has positive effects on learners; compared to monolingual learners, they have cognitive advantages because, in their brains, several languages are activated at the same time. Therefore, their brains know how to oppress certain information in order to concentrate on the subject at hand. A useful cognitive tool when it comes to learning in general.

Hence, research has proven the cognitive advantages. As a next step, JProf. Dr. Petersen says that research needs to conduct large-scale studies and trials in order to find out more about what happens in the classroom when languages are compared and mixed and in what ways students can profit of multilingualism in school.

JProf. Dr. Petersen states that she is optimistic that foreign language didactics will gradually open up to multilingual approaches to language teaching due to the fact that some approaches have already been made. As a future step, multilingualism should also be thought outside of the language classroom. Other subjects could make use of multiple languages in the classroom, as well, or create a space for multilingual students to use more than just one of their spoken languages.
SOURCES